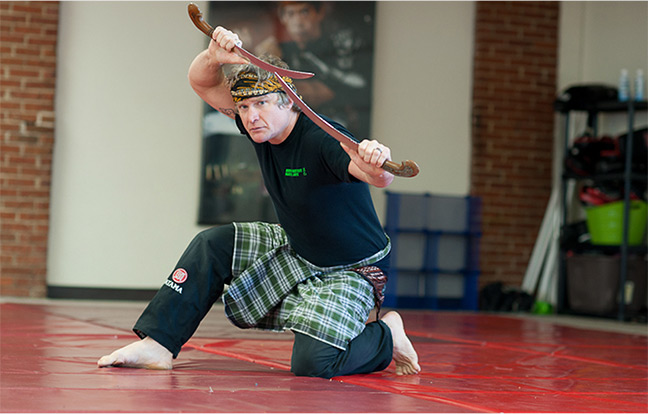 The national martial art of Indonesia is Pencak Silat. This martial art has been used and tested in combat for over a millennia. Indonesia truly represents "unity through diversity" as many geographical and cultural differences exist among each of these islands which make up the world's largest archipelago. As such, variations exist between systems of Silat developed in different regions of Indonesia. Unfortunately, Silat as a true combative form of martial arts is disappearing to more popular sport systems from around the world. Guru Besar Herman Suwanda is head of Pencak Silat Mande Muda, and has mastered over 25 systems of Silat from all over Indonesia. Examples include impacting systems like Chimande and grappling systems of Sumatra like " Harimau ".Silat utilizes fantastic sensitivity, unique leverage principles, and angular concepts forming a complete martial art. All ranges and distances are considered with or without weapons. The eclectic system was established in 1951 by Pendekar Suwanda's father, Guru Besar Uyuh. Pendekar Herman Suwanda began his training in 1960 at the age of five, and began teaching in Indonesia in 1973. He first revealed his system in the United States in 1980. Master Suwanda's Mande Muda system serves as a bridge to ancient and proven combative techniques, and as a path to being a better human being. The Brown Institute is a fully accredited member of Mande Muda International and Guru Brown is a fully licensed and accredited instructor under Pendekar Suwanda.Guru Brown is also a direct disciple in the Jagabaya program. Pencak Silat Mande Muda is a beautiful form of self-expression and a powerful martial art.